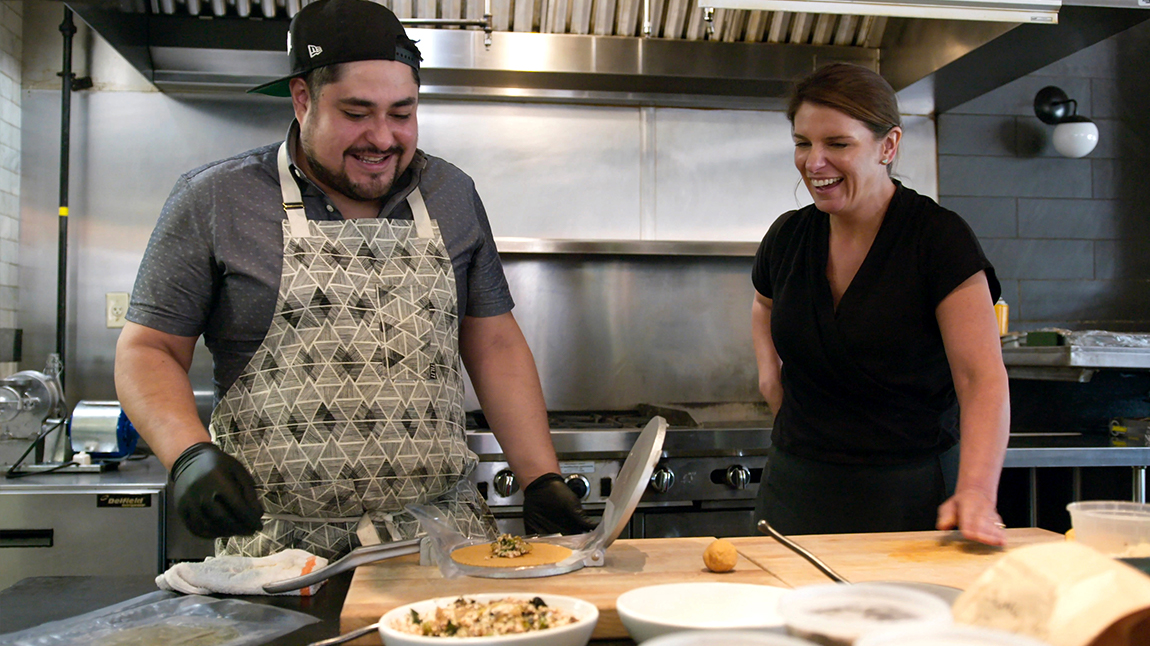 When Vivian visits chef Oscar Diaz at his downtown Raleigh, N.C. restaurant, Cortez Seafood + Cocktail, he mentions the importance of nixtamalization. It’s a big word that holds a lot of importance in the kitchen and throughout the history of the Americas.

Nixtamalization is the process of preparing corn (and sometimes other grains) by soaking and then cooking the kernels in an alkaline solution, often limewater or wood ash lye. The corn or grains are then washed and hulled. This process changes the compound of corn to make it more digestible to eaters, but also easier to handle as cooks. For one, by removing the husks, the corn is easier to grind. Nixtamalization alters the structure of the proteins and carbohydrates to allow for the ground corn to incorporate with water and create a consistency that makes the dough pliable with the ability to stay intact when re-formed. Without nixtamalization, there would be no masa! Another fun fact: this process helps pack more flavor. Drexel University food science professor Jacob Lahne told Cook’s Illustrated that “the softening of the corn structure allows volatile flavor compounds to be released where they were previously locked away in the kernel.”

In his restaurant, Diaz is working on a few nixtamalization experiments with N.C. State University scientist James Holland, who specializes in maize genetics. Using corn varieties indigenous to North Carolina, Holland and Diaz are tweaking their methods to bring us more tasty and colorful tortillas and empanadas rooted in Southern ingredients and cooking methods.

The word nixtamalization is the English version of its root, nixtamalli or nextamalli, which comes from the Nahuatl language spoken by pre-Columbian cultures in Mesoamerica, such as the Aztecs. Corn plays a prominent role in these indigenous cultures. According to anthropologist Tanya M. Peres, the first farmers to domesticate corn 9,000 years ago were in the Rio Balas River region in present-day Mexico. She says that the earliest culinary equipment associated with the nixtamalization dates to approximately 3,200 years ago in Mesoamerica. But in the 1700s, as colonizers began to commodify (and eat) the crop, they left out that crucial process, which had long-lasting detrimental effects moving forward. In her presentation for the Southern Foodways Alliance, Peres states: “In the nineteenth-century rural South, sharecroppers grew it, sold it, ate it, and became sick—all because of a lost recipe.”

Peres’ research is an incredible resource, which you can find on the Southern Foodways Alliance website. She highlights the ingenuity of native Americans in creating nixtamalization to stave off disease, something that the colonists ignored. This eventually carried into a pellagra epidemic in the rural South in the early 1900s. Peres also writes about the Florida archaeologist Charles Eubanks who literally unearthed corn research in the 1960s.

For more on how corn came to the U.S. South, food writer, chef and multimedia producer Stephen Satterfield produced an episode for Southern Foodways Alliance’s Gravy podcast that details the trajectory of one of the world’s greatest agricultural staple. You can listen to Maize Migrations here.