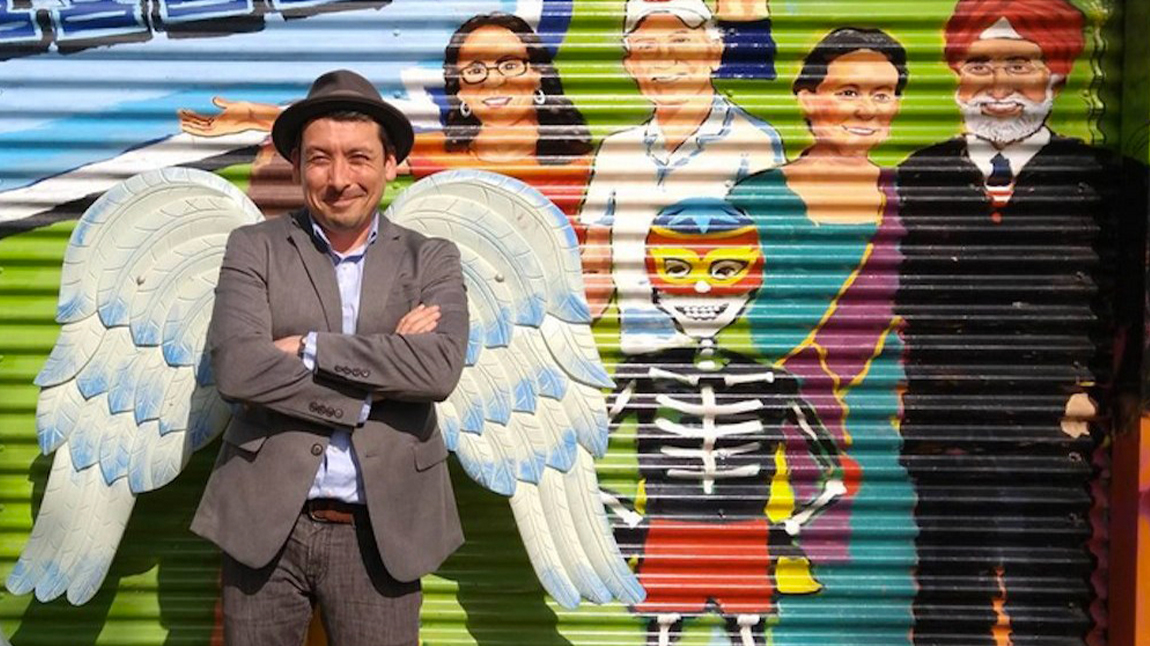 If you’re a super foodie, you may have noticed professor Steven Alvarez pop up in a recent Bon Appetit video, where he takes longtime food writer Rick Martinez to one of his favorite taco spots in Queens, New York. But Alvarez’s claim to fame is actually rooted in the South as the country’s first professor of taco literacy.

In the spring of 2016, Alvarez, a literature professor, launched a course at the University of Kentucky called “Taco Literacy: Public Advocacy and Mexican Food in the U.S. South.” He gave lectures on birria and bluegrass, taught the history of the tortilla, and invited chefs and food writers to weigh in during class lectures. The taco-centric syllabus included books like “Planet Taco: A Global History of Mexican Food,” “Tacopedia” and “Taco USA.” He said he started the class to explore the issues of immigration, inequality, and labor through the lenses of food and literacy, touring taquerias in Mexington, a Lexington neighborhood dubbed for its Mexican influence. [Producer note: We visit Mexington in our pickle episode. Stay tuned!]

Alvarez now teaches at St. John’s University in New York. But Alvarez often argues that taquerias in the rural South have staked claim long before the streets of Queens. He also argues that understanding Mexican cuisine is key to learning about our American history. Alvarez grew up Mexican-American in Safford, Ariz., a tiny town just a couple hours from the U.S.-Mexico border. His parents were born and raised on either side—his mother 30 miles south in Cananea, Sonora, Mexico, and his father 10 miles north in Bisbee, Ariz. Alvarez told the Dallas Morning News in 2019: “When has there ever been a time when being Mexican isn’t politicized? This is the most recent edition of a long history between the U.S. and Mexico. This is why it’s so important to understand the food and culture of our neighbors.”

Serving on Somewhere South’s advisory board, Alvarez played an integral role in informing our work. We caught up with el profe to learn more about tacos—and all the rich history that comes with them.

Taco literacy thinks about foodways in humanizing ways, and views literacy as a humanizing activity the same way foodways can be. The overall goal is to bring to the fore the culinary contributions of Mexicans, but also people’s stories and their faces to try to counter the stigma of “faceless immigrants.”

How’d you come up with that name?

People ask me, how can you read a taco? Really, it’s true history. You can read ingredients, you can read migration patterns, you can read the history of nixtamalization and of course what goes inside. That’s all just in the tortilla!

My research is in literacy, and mostly about Mexican immigrants. In doing this work with people, food always happens. I got into food because I was missing Mexican food and would find it for sustenance, to keep me going.

And now you’re known as the taco professor.

[Journalist] Gustavo Arellano got me involved with the Southern Foodways Alliance. They were the ones who got me to see that food is first about the people’s stories, history and even politics in the changing South. And when I saw that, I realized that it was the same thing I was trying to do with literacy studies. Food had always been there, I just didn’t see it.

Through foodways I have a public audience to introduce the more academic stuff. And with academics I can also bring in foodways, which gives special privileges to chefs, cooks and farmers as a kind of valued knowledge and expertise that academics should look at.

What’s cool about the name ‘taco literacy’ is that you kind of give storytelling another name, equating it to a necessary skill.

For me and a lot of the researchers who study literacy, it is not defined as a thing—not even as a noun. It is a practice. Literacy is something that we do. Often it’s seen as something a person has or doesn’t have and typically we'll talk about the term illiterate, which is a dehumanizing term. People communicate through stories. We grow up with stories and nursery rhymes and bedtime stories. All of those are literacy practices.

Food is also language. Recipes and teaching someone how to cook something—that's literacy. They’re deeply wound together. Some of our most profound learning is through our families and our communities and that literacy around food and the stories that go with it. It’s cultural practice bound with human relationships.

When you introduce this concept to your students, does it immediately resonate?

It depends on the students. In Kentucky, many students work in or have some tie to farming or the horse industry. They recognize the idea. Or anyone who works in a restaurant has some kind of experience with the back of the house. And actually, this is very similar to my classroom in New York City. With a proximity to immigrant labor, they have a different kind of understanding. And there's other students who have very little to no understanding. Maybe they haven’t had the chance to critically examine the ubiquity of food. It's the one thing that connects us, but we don't think critically about how that got there, how many hands it touched. Or how that food has been prepared and then the history beyond that.

All together, it really teaches us to appreciate creativity and human ingenuity. It’s been pretty cool meeting a lot of people who do this work in the South, where I’ve experienced the most diversity. And when students come into the classroom, they are bringing their own foodways and their family stories.

Walk us through a class visit to a Mexican restaurant. What are the sort of things you ask them to pay attention to?

It starts off with just researching places to go. I do give a few little pointers. One is to practice mapping locations online. Sometimes use different search terms. Using Spanish terms will give you different places that pop up. And sometimes they're far away from where you might've been looking. Read what people are saying on Yelp. Check out the menu ahead of time and figure out more about the words or items you don’t know. When you walk in, don’t expect the full story. You have to listen for it.

How would you tell someone to listen for a story?

There's the story of the students going to different places, narrating the experience, and then there's another layer of story later when they interview someone and learn to look deeper at stories through the prism of food. Ultimately, when thinking of literacy as doing, they begin to take away that to know a community and its foodways, you have to know the people, their stories, and also how those stories sustain them, just like the food.

It may not happen the first time. Definitely on the way out, say “thank you, I’ll be back.” And do come back! Also, many people think if they don’t speak Spanish then they won’t be comfortable in those spaces. But folks are friendly. So you can’t just parachute in, get your story and leave. You get to know somebody, you get to know their name. That goes a long way.

You talk a lot about demographic shifts through studying foodways. What did you learn in Kentucky about these changes?

Kentucky was interesting. Folks were coming from all over Mexico. But a lot of people were coming from Jalisco and Michoacan. Many of those people had family in Chicago. But they’d find themselves migrating from Chicago to Kentucky, where they heard about the horse industry hiring people. Once people started establishing roots and getting married in Kentucky, then it became a primary destination for people in Mexico who had connections to family and their own hometown. Now we’re at the point where [in Kentucky] there’s abuelos (grandparents) and bisabuelos (great-grandparents) because the community has been growing.

“Mexington” was a name used pejoratively by the community to describe “over there where the Mexicans lived.” Like everywhere in the South, the lines of segregation are firm, where the railroad tracks and overpasses form lines. This part of the city was historically where African Americans lived, but also poor white people in rental houses. So it’s probably one of the most diverse parts of the city, poverty being the equalizer.

You’ve seen our hand pie episode. Do you have a memory of an empanada you grew up eating?

Yes! Most of the empanadas in your show are savory. The Mexican empanadas I grew up with are sweet and my favorite ones were made out of pumpkin. They are my absolute favorite, spiced with a little bit of cinnamon.

These were the same I found in Mexington [Lexington, Kentucky] at Panaderia Aguascalientes. But there they also had custard ones, pineapple ones, even guava and cream cheese. They were very different from those you got from Colombian folks or the Argentinian style.