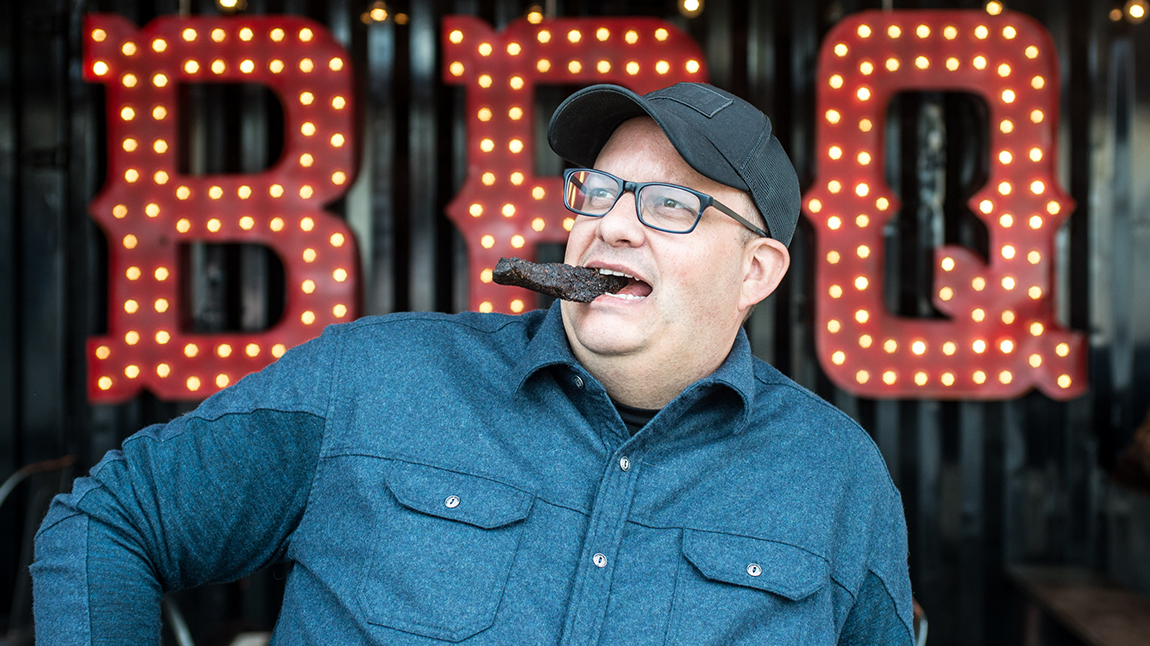 “Some food does more than sustain us. Through the alchemy of smoke and time, there is food that can also nourish your soul.”

These are the words written at the top of Daniel Vaughn’s barbecue blog, which he retired years ago (but you can still read Full Custom Gospel BBQ online). Written to launch his barbecue manifesto, those words carried a profound sentiment about how and why we eat. And they landed him an enviable job: Barbecue Editor.

In 2013, Texas Monthly magazine appointed Vaughn as its barbecue editor. To this day he is the first and only barbecue editor in the country. Later that year, Vaughn published his book, “The Prophets of Smoked Meat: A Journey Through Texas Barbecue.” It was the first title picked up by Anthony Bourdain’s line of books. Vaughn also co-wrote beloved North Carolina pitmaster Sam Jones’s first cookbook, “Whole Hog BBQ: The Gospel of Carolina Barbecue with Recipes from Skylight Inn and Sam Jones BBQ.”The New York Times called Vaughn “a tireless connoisseur of Texas barbecue.” Based in Dallas, Texas, he writes about the barbecue places and people up and down the largest state in the contiguous United States. Of course, he was the first person we called when looking to go to Texas, and he gave us the hot tip on mollejas in the valley (read more about that on our blog post). Here we talk more about his career writing about barbecue, the exciting evolution of Texas ‘cue and why a place like Kemuri Tatsu-ya is so special.

What is your first memory of barbecue?

That's a complicated question. I used to make ribs at home in Ohio where I grew up. I'd braise them in the oven, slather them in barbecue sauce and finish them on the gas grill. I don't think I'd be satisfied if I asked for barbecue today and someone served me the same thing.

The first time I understood barbecue to be something more than the food was in Alabama. My mom and late stepfather drove me down from Ohio to college in New Orleans, and we stopped for the night in Tuscaloosa. They wanted to eat at a chain restaurant next to our hotel, but there was an advertisement for Dreamland Bar-B-Que next to the phone in the room. I suggested we go there instead. It was the original location, and maybe their only location at the time (this was the year 2000). You could smell the smoke before walking through the screen door. Besides the bags of chips hanging on the wall, the menu back then had two options: A half rack of ribs or a full rack. They were huge spare ribs served with plenty of barbecue sauce. White bread came with every order, and we had so many ribs coming our way that they gave us a whole loaf. That bread sopped in sauce was a course almost as important as the ribs.

That meal is so memorable because it was my first experience in a real barbecue joint. The setting, the building, the smell of smoke and the packed house were as much of the experience as the barbecue. It was the first place I realized barbecue was a different kind of food to be enjoyed in a different kind of setting than any other food.

How did you create a career out of barbecue research?

I made this niche for myself by eating all the barbecue I could find along with researching the cooking methods and the history. The only way I was able to make a career out of it was because I was on the early wave of specialization when it came to food writing. Few people were writing seriously about barbecue joints when I started my blog back in 2008, and nobody was focusing only on barbecue joints. But the biggest boost to my ability to make this a full-time job is living in Texas. Texas Monthly is the only publication who has a full-time Barbecue Editor, and I don't expect Indianapolis Monthly to hire one anytime soon.

I have high standards for what I consider praiseworthy barbecue, but I'll stop at any barbecue joint, and try just about anything they serve.

Define the standard of Texas barbecue. Is it rooted in technique?

The techniques for cooking barbecue vary across the state, but the standard for Texas barbecue is meat cooked with wood. Most joints are judged on their sliced brisket, but the Texas Trinity also includes pork ribs and smoked sausage. The sausage-making tradition isn't common among other barbecue styles in the country, but it evokes the butcher shop roots of Texas barbecue. Beef ribs are prevalent, and often associated with Texas barbecue, but it's pork ribs you'll find on nearly every barbecue joint menu in Texas.

How has that definition evolved over time with the varied patterns of immigration into Texas?

Barbecue culture is constantly transforming in Texas. What was once a food only served at large, celebratory gatherings, usually for free, became a staple sold at meat markets and eventually barbecue stands and restaurants. Different parts of the state have traditional dishes that show their immigrant roots, like the German and Czech style smoked sausages of Central Texas, the beef links of southeast Texas that probably originated in Louisiana, and barbacoa in south Texas that's similar to what you'd find in northern Mexico. Today there are even more influences. If Japanese immigrants had settled in central Texas before the Germans, we'd have more barbecue joints like Kemuri Tatsu-ya in Austin than Kreuz Market in Lockhart. Now it's not uncommon to find Vietnamese-influenced barbecue banh mi sandwiches, smoked brisket gumbo and brisket ramen in Texas. Tex-Mex barbecue like tacos, enchiladas, smoked beef cheek barbacoa and smoked mollejas are growing in popularity around the state.

Through our exploration of barbecue, we realized the regional distinctions — and importance — often came up in the sides. What are some must-have sides in different parts of Texas?

Pinto beans, potato salad and slaw can be found just about everywhere, but I love getting beans and rice together in south Texas. Many places will let you mix the two as a single side. Green chiles find themselves into cheese grits and mac and cheese in the El Paso area and in the Texas Panhandle. Rice dressing or dirty rice can be found all over southeast Texas, and a full barbecue meal in the meat market barbecue joint of central Texas is rounded out with a whole avocado, a slice of cheese, pickles and raw onion.

You’ve written beautifully about Kemuri Tatsu-ya. What excites you about a place like that? What other barbecue joints in Texas have similar creative reinterpretations?

The single dish that excites me most at Kemuri is the smoked fish collar. It's undeniably Texas barbecue. The protein may be different than beef, pork or poultry, but all the Texas barbecue principles are embodied in the dish. The fish collar is an off cut like spare ribs and brisket, the seasoning is simple and it's smoked until tender. It eats like the fatty brisket of the sea, and a squeeze of lemon provides the same balance as a dill pickle does with a slice of brisket.

I love the brisket ramen as well. The brisket tsukeman ramen is incredibly rich, and the brisket is well-smoked. My most memorable bowl of brisket ramen was from their partner restaurant, Ramen Tatsu-ya last October. The brisket was from Kemuri, and elements of the broth were smoked there too. I tipped the bowl up to finish every bit of the smoked shoyu broth which was like liquid brisket.

Other joints similar to Kemuri are Loro, also in Austin, and Blood Bros. BBQ in Bellaire (in the Houston metro area). They both pair Asian flavors with barbecue very well. There's also a great pop-up in Houston called Khói Barbecue, which has roots in Vietnamese cooking. I cannot wait for them to open their own place. They're all evidence that the definition of Texas barbecue is forever expanding.