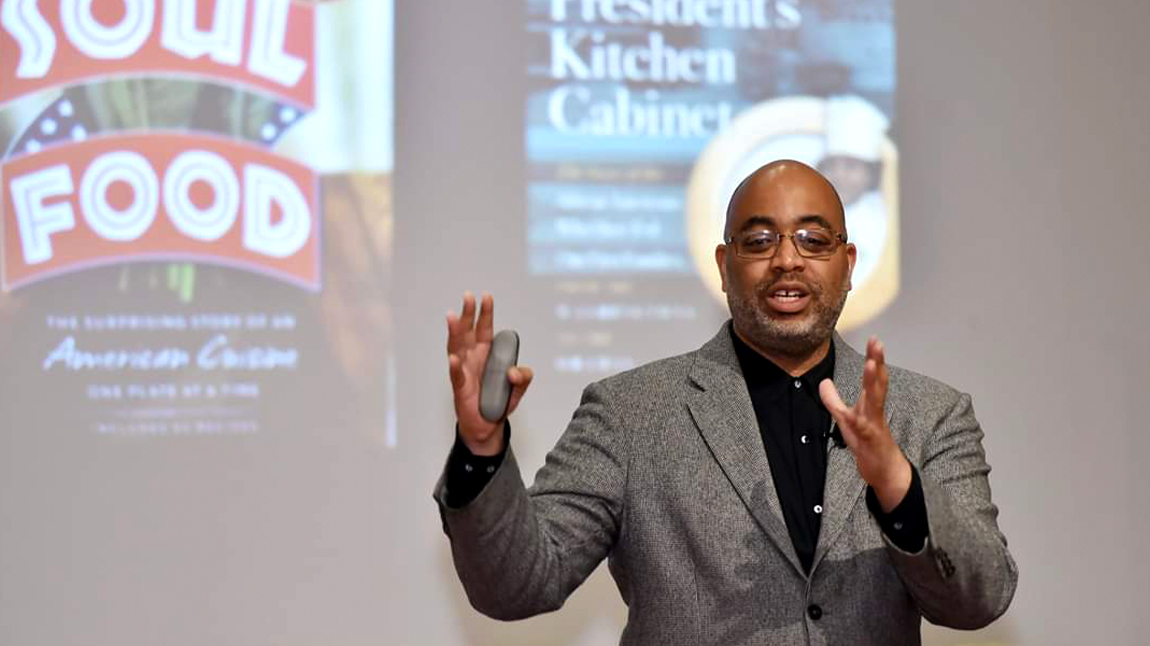 Adrian Miller’s path to becoming a biographer of African American food histories was not straight nor narrow. The Colorado-based lawyer-turned-writer has followed his curiosity for soulful cuisine around the country, documenting endangered stories of Black foodways and unsung culinary trailblazers. His book, “Soul Food: The Surprising Story of an American Cuisine,” took home the 2014 James Beard book award for reference and scholarship, while his follow-up, “The President’s Kitchen Cabinet: The Story of the African Americans Who Have Fed Our First Families, From the Washingtons to the Obamas,” received an NAACP Image Award nomination and high praise from food scholars and American history buffs alike.

In “Somewhere South,” Adrian joined Vivian for a barbecue tour of eastern North Carolina where vinegar-based, whole-hog pork is king.

We recently caught up with Adrian as he’s quarantined at his Denver home, working on his third book, “Black Smoke,” exploring the history of African American barbecue culture.

The short answer is "unemployment." I had just finished a stint in the Clinton White House, and I was trying to get back to Colorado to begin a career in politics. The job market was slow, and I ended up watching a lot of daytime television. In the depth of my depravity, I said to myself, "I should read something." I went to a local bookstore, and while browsing, I came across a copy of John Egerton's “Southern Food: At Home, On the Road, In History.” Early in that book, Egerton wrote (paraphrasing) that the tribute to African American in cooking had yet to be written. That started my journey, and I wanted to specialize in my traditional food, which is soul food.

And for reference, how do you define “soul food?”

Soul food is one of the traditional African American cuisines that blends the culinary traditions of West Africa, Western Europe, and the Americas. Black migrants from the American South took cuisine all across the U.S.

What are the indisputable elements of BBQ?

To me, it's meat, wood, charcoal, and sauce.

What are the more debatable elements of BBQ?

Endless possibilities here, but I'll say what type of meat, wood preferences, whether or not sauce should be included, and the side dishes.

During the filming of this episode, you came down to eastern North Carolina to sample whole hog barbecue for the first time! What were the most interesting parts of your barbecue tour with Vivian?

I was fascinated by the whole hog barbecuing process. To see the artistry up close was really impressive. I really enjoyed watching the preparation process at Skylight Inn. Seeing the steaming meat and crispy pork skin rhythmically chopped, periodically doused with a spicy vinegar sauce, flipped around, and chopped up again was food choreography at its best. The turkey barbecue at Boogie’sTurkey BBQ was also cool to see. Turkey as a pork substitute is huge in soul food circles, and I've seen the same trend at African American-owned barbecue joints around the country. It was cool to see turkey get the traditional North Carolina treatment.

I know you and Vivian talked about this, but I’d appreciate you expanding on it. Could you talk a bit more about the trajectory of barbecue itself? How it became contemporarily popular and how Black folks went from being barbecue ambassadors to muted in the barbecue conversation?

Barbecue was Native American in origin, and then it was melded with European and African culinary practices. In time, African Americans became barbecue's standard-bearers because they were the cuisine’s principal cooks. In many situations, African American barbecuers kickstarted the barbecue scenes in many communities across the country. In recent times, making barbecue has been transformed from menial culinary work to a craft that's cool. Barbecue's reframing has shifted the focus away from African Americans to white barbecuers.

In your humble, learned opinion, what's the difference between a barbecue and a cookout?

I can see why people get it twisted because both usually involve getting together outdoors with family and/or friends for a good time. A barbecue happens when the food is cooked for a long period of time, so it's going to involve brisket, chicken, hot links, pork shoulder, and or pork spareribs. A cookout is more about grilling, and involves a much shorter cooking time. I'm expecting to see hamburgers and hot dogs at a cookout.

In your travels and research, what places are the current hubs for BBQ?

Tell us a bit about your upcoming book!

My forthcoming book, “Black Smoke,” is a celebration of African American barbecue: the cuisine, the culture that surrounds it, and profiles of the cooks who made it all possible. It's a strong reminder that the story of barbecue in the United States can't be told without including African Americans as a central part of the narrative. It is scheduled to be published by the University of North Carolina Press in spring 2021.