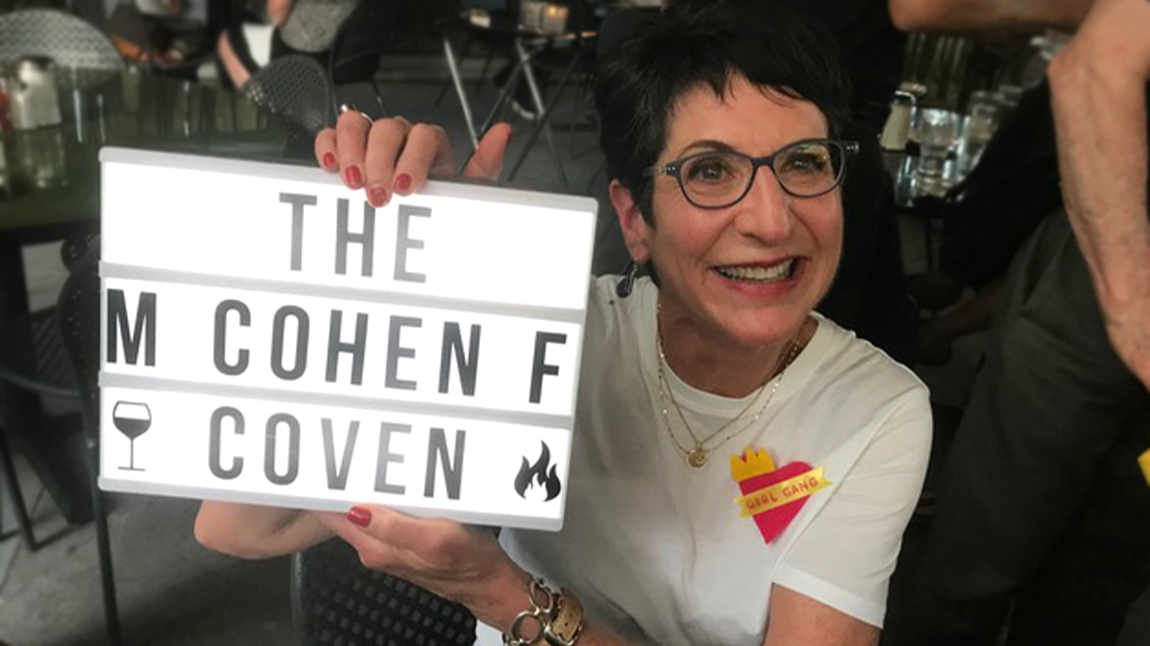 Anyone studying food in the South knows of Marcie Cohen Ferris. She is a teacher and scholar of Jewish foodways in the American South, but she is an equally knowledgeable and recognized voice in Southern foodways. Her book, “The Edible South: The Power of Food and the Making of an American Region” (UNC Press, 2014), probes historical moments and examines how food has shaped Southern identity in its role as cuisine and commodity.

Her first book, “Matzoh Ball Gumbo: Culinary Tales of the Jewish South” (UNC Press, 2005) details the migration patterns, social histories, food traditions, and diverse voices of Jewish families to the U.S. South. Ferris grew up in a Jewish family in Blytheville, Ark., and much of the book is rooted in oral history interviews conducted throughout her doctoral research.

As a professor of American Studies at the University of North Carolina at Chapel Hill, Ferris’ courses on food studies incorporated guest lectures from local chefs, farmers, documentarians, public health officials, and more. She also taught classes in Southern studies, Southern material culture, and the history and culture of the Jewish South. Offering a wealth of knowledge and experience, Ferris also serves on “Somewhere South’s” NEH advisory board.

Let’s start with a broader look at Southern food. When did serious conversations about Southern food start happening in academia?

Southern food has had a place in academia and the historical record of the American South for a very long time. I’m thinking of the detailed descriptions and illustrations of the food of Native coastal people in Thomas Hariot’s 1590 “A Briefe and True Report of the New Found Land of Virginia,” as well as the accounts of Southern food in works by European-born naturalists, promotional literature, travelers’ accounts, letters, and diaries. Detailed reports of Southern food bridged foreign cultures and distant worlds.

Historian Malinda Maynor Lowery counters European-centric narratives arguing that Southern food begins with the foundational foodways of indigenous southerners. She writes, “Our new neighbors appropriated the abundance our own ancestors cultivated, denied it to us, and then marginalized our influence on ‘their cuisine.’” Archaeologists and anthropologists were some of the first scholars to examine the early food remains of Native Southerners. Consider the impact of the cultivation of corn, which supported larger populations in the Mississippian Period, an era characterized by the massive ceremonial mounds of chiefdoms throughout the Lower Mississippi River Valley. Farmers of the 19th century experimented with Southern seeds and plant breeding to improve taste and flavor.

When did the idea of Southern food begin resonating in more modern historical accounts?

In the early 20th century, Southern sociologists and public health scholars studied the problematic “food habits” of white and black working poor in the American South. Dietary studies abounded in this era. Food was an important topic in settlement schools, agricultural colleges, and early extension programs that intervened in both positive and negative ways to ‘improve’ the Southern diet and diversify crops. Southern food was also front and center in the documentary programs of the New Deal in the 1930s and 194s, such as the photography of the Farm Security Administration and the Works Progress Administration state and city guides, the “American Eats” project, and Southern life history interviews conducted across the region. From the late 19th century to the present, consumer economies and industry have branded and sold ‘the taste of the South’ in food products, popular culture, and media.

You have been involved with the Southern Foodways Alliance (SFA) practically since its founding in 1999. When did you decide to focus on foodways in your own academic pursuits, and how did that influence your work with SFA?

In the 1970s and ‘80s, food became an important field of study across the country and in the South. This was inspired by social movements of the 1960s, the rise of folk studies, regional studies, material culture and social history. These fields of study recognized the voices and expressive cultures of all Americans, but particularly those of women, working-class people and people of color who were ignored in earlier “great men” histories. When the Southern Foodways Alliance— an initiative of the Center for the Study of Southern Culture at the University of Mississippi— organized its first annual symposiums in the early 2000’s, I was ALL in. My first SFA presentation was entitled, “We Didn’t Know from Fatback: A Southern Jewish Perspective on Barbecue.”

When did you start writing the book “Matzoh Ball Gumbo: Culinary Tales of the Jewish South?”

We moved to Washington, D.C. in the late 1990s when Bill [Ferris, her husband and scholar] was appointed Chairman of the National Endowment for the Humanities by President Bill Clinton. I began my doctoral work at George Washington University then and thanks to my professor, folklorist John Vlach, I wrote a term paper exploring southern Jewish foodways. That grew into my dissertation and “Matzoh Ball Gumbo.”

It’s a deep history of the Jewish South and food as a lens into these complicated worlds. How did southern and Jewish dishes evolve?

From the early South to the present, each generation of southern Jews have balanced their regional and religious identities as they considered the plate set before them. In the colonial and antebellum South, Jews interacted with enslaved African Americans, Native Americans, Caribbean islanders and newly arrived European immigrants. During the 19th-century South, Jews adapted their culinary traditions within predominantly white Christian worlds where they adopted the region’s contested “traditions” of race, class, and gender. As southern Jewish identity evolved, Jewish women were the keepers of family foodways and they determined the “grammar” of southern Jewish cuisine.

Miriam Gratz Moses Cohen, the niece of pioneer Jewish educator Rebecca Gratz of Philadelphia, was married to Solomon Cohen of Georgetown, S. C. In the 1830s, Cohen kept a journal that she filled with recipes. There were Miriam Cohen’s Southern recipes for biscuits, corn bread, sweet potato pudding and pound cake, as well as her Jewish recipes for “Pesach Sponge Cake,” “koogle,” “Haroseth” and “Passover soup dumplings”—or matzoh balls. While some homemakers separated Southern and Jewish dishes, others mixed the two cuisines. This is evident in “Generation to Generation,” the 2011 Temple of Israel Cookbook organized by the Ladies Concordia Society in Wilmington, N. C. On the same pages, there are recipes for cheese grits and challah souffle, cornbread and mama’s yeast rolls, babka and lemon cake, mandelbrodt and pecan crispies.

In “Jewish Roots in Southern Soil: A New History,” which you co-edited, this one phrase struck me: “Grits and barbecue did not lead Southern Jews astray.”

Southern Jews have eaten and shaped their religious, cultural, and economic lives through mobility, adaptation, and pragmatism. They have passed traditional Jewish recipes, memories, and food-related practices from one generation to the next. Dishes are strongly influenced by regional ingredients, flavors, and cooking methods.

Family and transregional Jewish networks, the influence of skilled African American cooks and caterers, and the culinary impact of an evolving global South are at the heart of southern Jewish food. African American and Jewish food historian, Michael Twitty (“The Cooking Gene: A Journey Through African American Culinary History in the Old South”) argues that Jewish and African American food have crisscrossed throughout history, “They are both cuisines where homeland and exile interplay. Ideas and emotions are ingredients—satire, irony, longing, resistance.” Twitty says, “The food of both diasporas depends upon memory.”

You’ve said in other interviews that your Russian Jewish grandmother would add “just a little” bit of pork for flavoring in her recipes. What sort of foods did she make that were southern and Jewish?

I loved my Grandma Luba’s slow-cooked ‘pole’ beans, which she did flavor with a ham hock. I’m sure an African American domestic worker must have shown her how this culinary ‘tweak’ transformed green beans into a luscious, smoky-flavored vegetable side dish. When I spent the night at her house when I was a little girl, she fried tiny matzoh meal pancakes for breakfast. Luba made delicious matzoh ball soup and other Jewish dishes from recipes that she learned from her mother and grandmother in New York and Russia. I adored her crispy molasses cookies, which she made with B’rer Rabbit Molasses—a racialized example of Southern food branding. Black-eyed peas were another Southern dish she mastered and made a bit Jewish, because everything she prepared tasted a bit ‘old world,’ including her favorite dish, chicken chow mein. Stewed chicken, onion and celery, a rich broth—what could be more Jewish?

How did your family end up in Arkansas?

My food “language” is Southern and Jewish, and I learned to speak it in the Arkansas Delta. My grandparents were Eastern European Jews who came to America in the early 1900s and settled in vastly different Jewish worlds—my mother’s family in Connecticut and my father’s in northeastern Arkansas. In the early 1920s, my grandparents Samuel Joseph “Jimmy” Cohen, a civil engineer from Minsk in Belarus, and his young bride, Luba Tooter Cohen from Odessa, Ukraine, left their Russian immigrant families and the vibrant Jewish worlds of New York City for the rich agricultural land of Mississippi County. There they began a family and became enmeshed in the region’s critical worlds of flood control and construction— including 100s of miles of drainage canals, bridges, and highways.

When planning our dumpling episode, it was you who suggested to Vivian that our team should consider the matzoh ball. What’s your theory on why this is a dumpling?

How can you NOT consider the matzoh ball? (Actually, its real name is knaidlach.) Definitely a dumpling. You mix ground meal made from crushed matzoh crackers with schmaltz (rendered chicken fat), eggs, water, salt, and pepper; then chill, form into balls, and simmer after dropping into a pot of gently boiling water. THAT would be a dumpling. Of course, you cannot just eat a naked matzoh ball, right? Get a nice fat chicken; make chicken soup. There are many variations of matzoh balls made across the Jewish South. In New Orleans, you can taste the influence of both Alsatian and Creole cuisines in the green onions, parsley and ginger added to matzoh ball recipes.