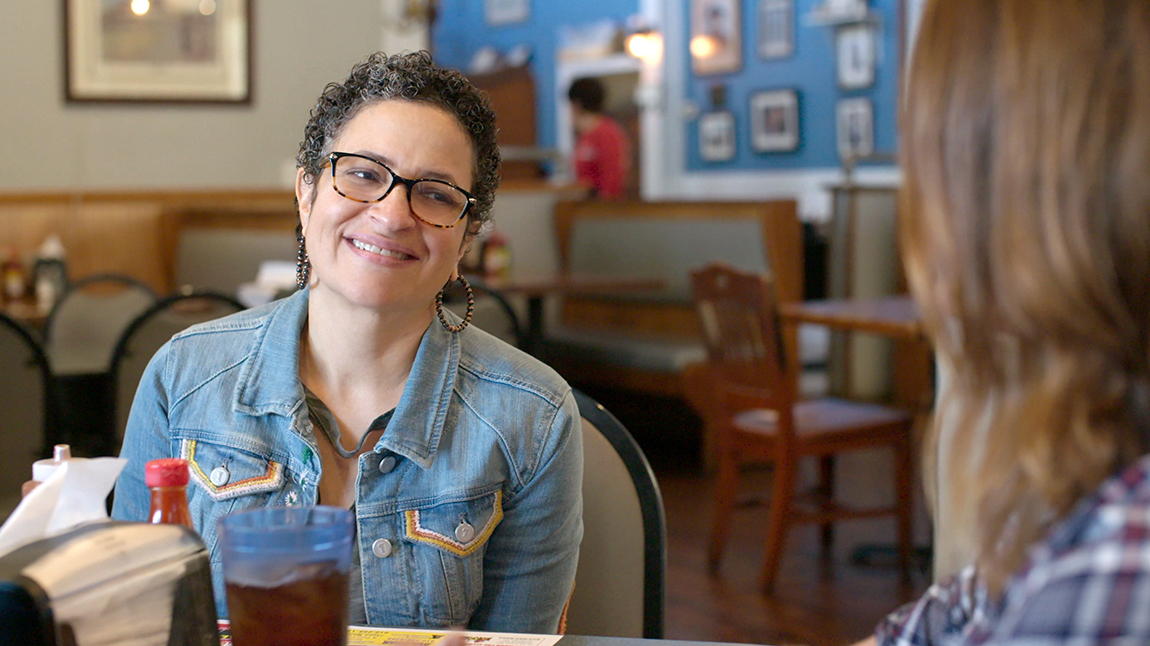 The team behind “Somewhere South” was lucky to have a panel of academics and scholars working with us from the start. One of those advisors is Malinda Maynor Lowery, a history professor at the University of North Carolina and also Director of the Center for the Study of the American South. Not only did she offer her expertise behind the scenes but she served as Vivian’s guide at the annual Lumbee Homecoming in Pembroke, N.C. for the “It’s a Greens Thing” episode. Lowery shared more about the Lumbee people than what could be included on screen in the following Q&A.

Who are the Lumbee?

Each tribe has different criteria for that [membership]. We have constitutional governments. Our ways of belonging are quite specific, which unfortunately hasn’t resonated with the federal government’s definition over the many hundreds of years. Tribal governments are often routinely challenged with proving the legitimacy of our identities, but we also know that it’s hypocritical for people who are foreigners to try to tell us that we don't belong.

How do Lumbees define their identity?

Why are the questions: "Who's your people? Where do you stay at?" so revealing to fellow Lumbee members?

The ‘Who’s your people?’ is a way of establishing our kinship relations. And I think sometimes it's hard for non-Natives to recognize that kinship relations are different from racial ancestry or heritage, but that sometimes they overlap. The important thing to remember about Native communities, and Lumbees specifically, is that we know we're Lumbees because our families are Lumbees. The idea of pure blood or pure ancestry or “how much Indian you are?” is an outsider's way of making us disappear. The whole premise behind quantifying “purity” is that one day you won't exist. Every group changes and mixes with other groups, and no other American group is asked to prove its identity with some standard of blood purity. But for Natives, it’s a standard that U.S. policy has applied in order to define us out of existence. And so Lumbees and other Native communities are actively engaged in resisting that erasure by continuing to insist that our identity is foundationally situated in our family relations. When somebody who is non-Lumbee marries in or has a child with someone who is Lumbee, our assumption over the centuries has been that that person and their children acquire a kind of citizenship in our community that is more important than the place that they came from. So if someone is successful at understanding our own rules of hospitality, the ways in which we govern, the socialization of our children, our manners and our customs, [then] the fact that they're non-Indian often just doesn't matter or stops mattering.

What matters is, are their children maintaining a relationship to the community? Which extends to the other criteria, such as “Where do you stay at?” or “What's your relationship to place?” For me, my parents decided to have me born in Robeson County even though they knew that I wouldn't be raised there. It was really important for them to always be able to say I had a kind of unalienable attachment to the community. That status of being born there — in their minds —  provides their peers, their community members, our relatives with that criteria that people need to know how I am affiliated. I made the same decision with my daughter. I knew she was not going to be raised in Robeson County but I gave birth to her there.

Why is Lumbee sovereignty not dependent upon tribal recognition?

We have existed as a political community since before the federal government existed. As a matter of law, it’s only an ancient and outdated “doctrine of discovery” that gives the United States any right to decide whether or not we're Indians or what the nature of our sovereignty is. And that doesn’t just apply to Lumbees; that's everybody who is Indigenous. The doctrine of discovery is the idea that a Christian nation has the right to inhabit, take over and exploit the resources and people of a non-Christian nation. It is upon that legal basis that colonization proceeded following the arrival of Columbus and how the United States acquired by treaty this land from Great Britain after the American Revolution. So that legal doctrine — most people I think today would say--is discriminatory. It is a violation of human rights. It constitutes the alienation of the freedoms that we have come to expect in the United States. And yet it persists in the form of a federal recognition policy unfairly and unevenly applied to tribes who all have very different histories. So I think groups, like the Lumbees, like the Navajo nation, like the more recently recognized Mashpee Wampanoag nation in Massachusetts, retain their sovereignty because they have not given it up to anyone else and because as political communities, they predate the existence of the United States. The idea that federal recognition could determine such a thing is based on this fundamentally illogical and discriminatory belief system that really doesn't have a place in our 21st century society.

I was struck by a sentence in the introduction of your book, "The Lumbee Indians: An American Struggle." It read: "When American citizens continue to ignore American Indians or tell them they do not exist, they continue to take part in colonialism." Can you explain that a bit more?

The particular kind of colonialism that's practiced in the United States is called settler colonialism: one where the extraction and exploitation of Indigenous lands, resources and people depends on the settlement of foreigners onto land that they do not own or possess. There's other forms of colonialism, like what we've seen with Britain and East Africa and other places where a form of home rule is established, where the British don't go in and just try to eliminate the Indigenous population. What's happened in the United States is that Britain and other European empires have aggressively settled their populations here as a means of exploiting and seizing the land, people and resources of Indigenous communities. And so to justify that illegal takeover, they tell a false narrative, a false story. They have had to perpetuate a myth that Native people are no longer here or that we were never here to begin with. It's still true that at many schools, students learn that this was fundamentally an empty place before Europeans arrived. And if there were Native people here, then their technologies and bodies were so inferior that they died immediately because of disease. Or it was all just a happy accident to allow for the greatness of European civilization to expand. In propagating that myth, the result has been that many Americans believe that we never existed or that we no longer exist. We might used to exist, but we no longer do. So when people tell me today, you're not really Indian — that is a way of perpetuating colonialism. It's insisting upon my erasure as an Indigenous person while perpetuating the myth that a settler can come in and claim our bodies, our histories, our heritage, our culture with no actual legitimate basis for doing so.

When I speak of Lumbee foodways and hospitality, I'm speaking somewhat more generally of foodways and hospitality as we've inherited them and kept them alive from our ancestors who belonged to many, many different communities. We are survivors of a long and sometimes tortured process of cultural change. When Europeans arrived here, our ancestors and members of these multiple different tribal communities were ready to embrace them as potential political allies. It is very clear in the history of the Lost Colony and Jamestown and Plymouth that the early months and years of those relationships were ones of trade and diplomacy rather than hostility. Who was in the proper position to exercise such diplomacy? It was Native people who were at home, welcoming strangers. The foreigners understood their place as outsiders, and acted accordingly as guests. When it became clear that there was money to be made by insulting, killing and exploiting native people, then they turned from guests into enemies. The sense of hospitality that the South or what Southern food is now known for is also a betrayal of hospitality. And the betrayal is the story that's been underappreciated or ignored, I think, as people have celebrated what Southern food has to offer.