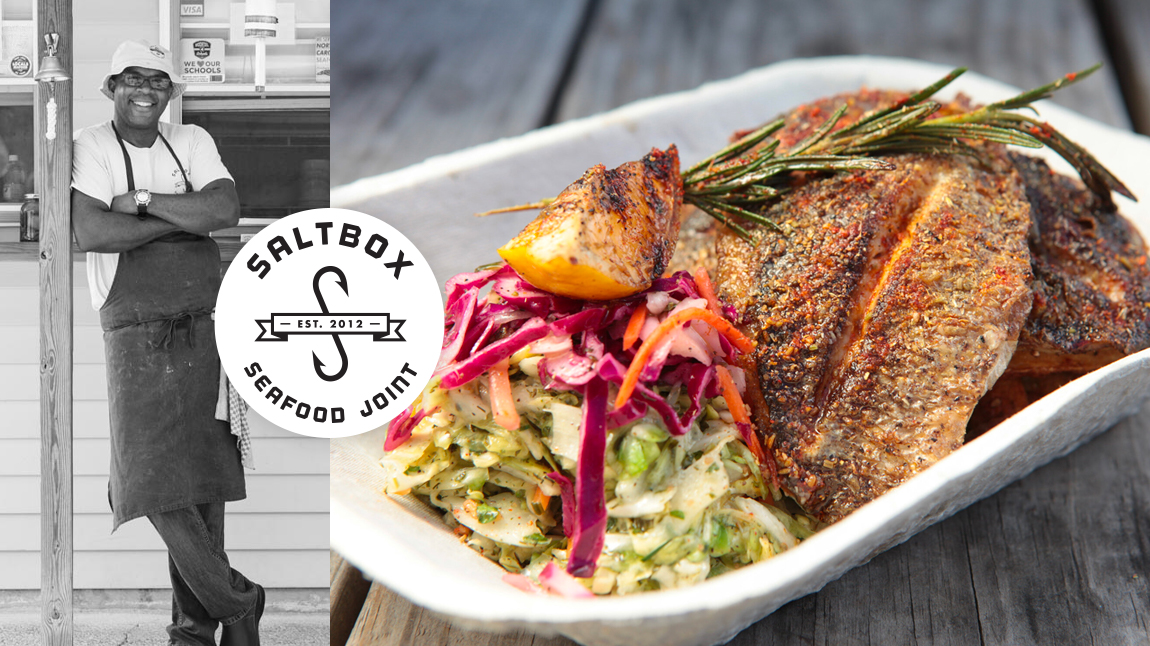 As restaurants slowly reopen across the South, we wanted to share information about a few of the dining options featured on or connected to chefs seen on “Somewhere South.” If you are able to support these businesses, they would appreciate it.

Chef Ricky Moore’s restaurants are open for business at both locations in Durham, N.C.. Moore, who appeared in the porridge episode and the Markay Media produced half-hour special, “The Hook,” is known for his fresh North Carolina seafood, ordered fried or spiced griddled as plates and sandwiches with sides. Recent offerings include mahi mahi, flounder, grouper, gray trout, bay scallops and more. Takeout and outdoor seating is available at both locations. Info: saltboxseafoodjoint.com

This Raleigh, N.C. restaurant is owned by chef Cheetie Kumar who appeared in the pickle episode and is one of the chefs who organizes the Brown in the South dinner series. Kumar is offering heat-and-eat meals, snacks and beer and wine via the restaurant website. Some offerings include movie night concession treats (popcorn and sweet treats with a Garland flair, $25),  a chaat kit for four ($25) and a Tandoori-spiced whole split chicken on basmati rice with "butter chicken" gravy, marinated tomato-cucumber-red onion salad and coconut- buttermilk panna cotta with macerated farmers market berries ($70). Orders are placed Monday-Thursday for contactless, curbside pickup Friday and Saturday. Info: garlandraleigh.com

This Saturday-only barbecue restaurant in Beulaville, N.C. has switched to takeout only and Sid Blizzard Jr. says it has been a big hit with their customers so far. They do have limited outdoor seating available for those who would like to eat there. The restaurant opens at 8 a.m. Saturdays and they sell until they run out of whole hog barbecue and barbecue chicken. Info: https://www.restaurantji.com/nc/beulaville/sids-catering-/

Sam Jones, the third-generation barbecue pitmaster, starred in Somewhere South’s barbecue episode when Vivian and scholar Adrian Miller went on a tour of eastern North Carolina restaurants. Jones is offering curbside pick up at his namesake restaurant, Sam Jones BBQ in Winterville, N.C. and takeout at his family’s restaurant, Skylight Inn in Ayden, N.C. Dine-in options are available at both restaurants at a limited capacity.  Info: samjonesbbq.com and skylightinnbbq.com/welcome

If you watched the pickle episode, you saw Farhan Momin, a young chef and fulltime dentist who cooks for the Brown in the South dinner series. Momin and his father, Ahmed, opened a halal butcher shop and takeout restaurant in Atlanta earlier this year called Atlanta Hala Meat and Food. They received a glowing restaurant review in the Atlanta Journal Constitution in mid-March. Critic Wendell Brock wrote that Momin “is a formidable talent who straddles two cultures (and two professions) with exceptional grace. His cooking is a one-of-a-kind, only-in-America combo of the old and new: Gujarati home cooking served side by side with some bodacious and delicious modern riffs that feel born of an obsession with fast food and cultural mashups. Behold: the first generation of South Asian American bun sandwiches. (You can keep the wraps.)” The restaurant is open for takeout. Info: http://atlhalal.com/