by
Shirlette Ammons
If You Go 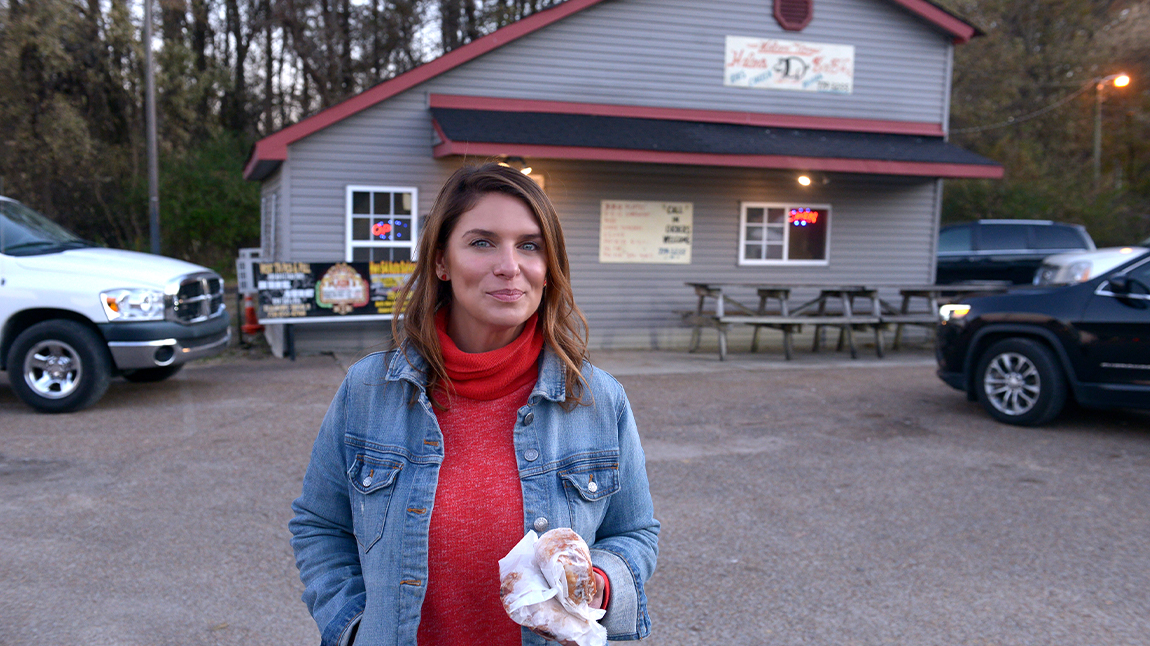 Here’s a guide to the joints, restaurants, and other stops we made in pursuit of all things barbecue with a couple bonus destinations thrown in for good measure!

If you’re in the mood for a Saturday drive, head down to Beulaville, N.C., a little blip on the barbecue map, where Sid Blizzard Sr. and his son, Sid Jr., fire up the pit at the cash-and-Saturdays-only barbecue joint. Locals line up as early as 8 a.m. to enjoy Sid’s barbecue chicken and pork for breakfast.

It’s hard to say anything about Skylight Inn that you haven’t heard before. The hub for eastern North Carolina signature whole hog barbecue, Skylight Inn’s barbecue trays and sweet squares of cornbread are legendary. Proprietor Sam Jones follows in the footsteps of his father and grandfather, serving up whole hog cooked over hot coals and plumes of grease-infused smoke. Don’t head “downeast” without making a stop here.

The menu at Boogie’s Turkey BBQ is loaded with southern and soul food favorites like collard greens and chicken pastry, but the thing to order here is the turkey barbecue. Pastor Willie Hill Sr. enlists the help of his daughter and grandsons to deliver an alternative to the region’s better known pulled pork that doesn’t sacrifice flavor.

Grady’s BBQ, in Dudley, N.C., simply does barbecue right. Folks usually smell the smoke well before driving up to the non-descript cinderblock building, situated in rural North Carolina, well-off any beaten path. The husband and wife duo of Stephen and Gerri Grady are as beloved for their delicious barbecue and signature sides as they are for their warmth and hospitality. When debates about “best whole hog barbecue” ensue, Grady’s certainly has a dog in the fight.

Helen Turner has been heralded as a barbecue queen, and we bow down. A few miles off the highway, you’ll find her eponymous joint by the cloud of smoke trailing high from the pit (and delicious smell of smoke). The sandwich selections can’t be beat. If you’re really hungry, order a large barbecue sandwich, add pork skin and choose between a mild (sweet) sauce or hot (actually spicy) sauce. Grab a smoked bologna sandwich for the road. Cash only.

If you visit BJ’s Alabama BBQ in Tampa Florida (that’s right, Florida not Alabama) be sure to bring a healthy appetite. Pit mistress April Moreno offers a meat-centric Alabama-style menu that features smoked sausages, ribs, and chopped pork drenched in a deliciously rich, sweet sauce designed to be sopped up with the slabs of white bread that accompany each order.

Words cannot paint a proper picture of this annual gathering where community and friendly-competition perfectly meld.  Locals, often self-identified as “Florida crackers,” converge on the picturesque island for a weekend of mullet fishing, smoking, and eating. Smoking mullet is a time-honored tradition in this part of the country and, as the Terra Ceia Mullet Smoke-off reveals, everyone has their own method. After smoking their mullet for hours, quite often in homemade smokers, contestants deliver their final product before a panel of judges who decide who will walk away with bragging rights and a modest cash prize.

During our smoked mullet expedition, we met Ricky Gullet who served as our guide to all things mullet. He and his wife Dea are owners of Gulley’s food truck, which serves up the day’s freshest catch. Their seasonal menu is constantly changing, but they always have local, smoked mullet sandwiches and spread available as well as their MLT —  mullet, lettuce, and tomato sandwich.

If you happen to find yourself near the Gulf Coast, drive an hour north away from the balmy weather and toward a cluster of small towns. San Diego is outside of Alice (because you’ll see a sign for that small town). Of course, sisters Sarah Chapa and Rachel Saenz make amazing mollejas. But don’t sleep on their brisket or chicken, either. They serve all the classics with a Tejano twist.

If you’re in Austin, you’re in for a good time. Make it even better by saddling up to the bar at Kemuri Tatsu-ya and trying a barbecue boat of Japanese-Texan meats and pickles that you 100 percent will not find anywhere else. Plus, there’s an entire menu of Tiki drinks to wash it all down. What more can we say?