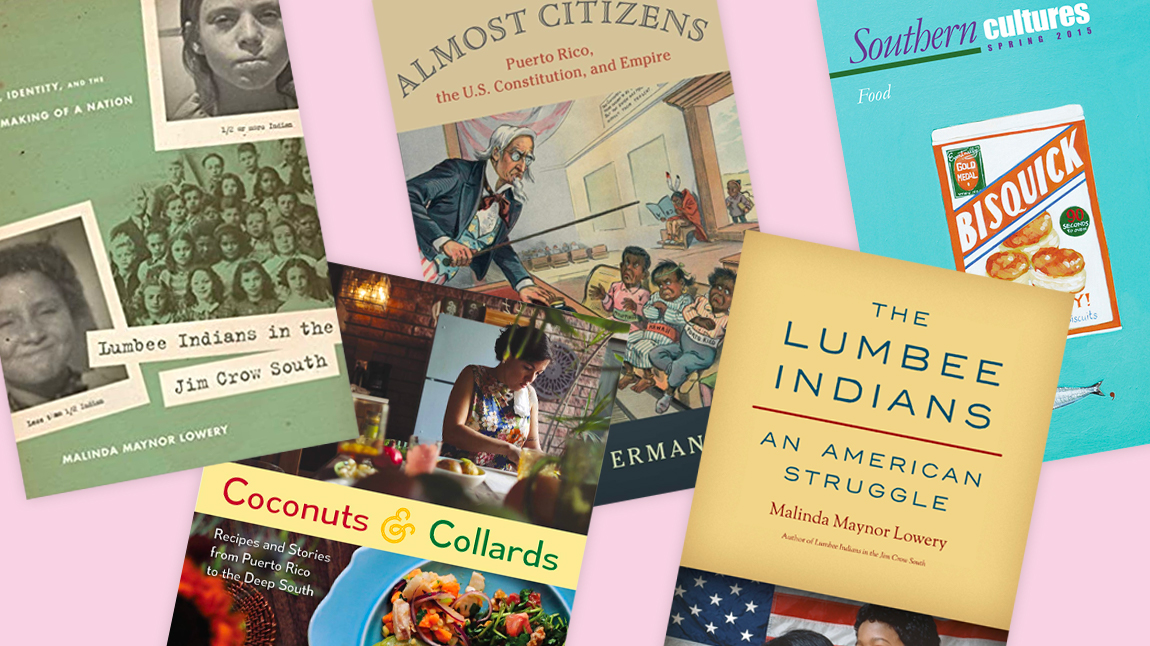 With the help of our scholarly advisors, we dug into books and articles to research each of our episode themes. Below is a list of some of the most helpful books and essays we found that shaped our understanding of  the Lumbee and Puerto Rican history and foodways.

“Coconuts and Collards: Recipes and Stories from Puerto Rico to the Deep South” by Von Diaz  (University Press of Florida, 2018)

This delightful book from Von Diaz, who appears in the “It’s a Greens Thing” episode, is a recipe-filled memoir. It will inspire you to go in search of culantro and other ingredients to make her Puerto Rican fare. It may also have you dreaming of booking a trip to the island to enjoy a soul-satisfying meal like the one Diaz describes enjoying in Yabucoa, a mountaintop rainforest overlooking the ocean.

This book explains how the United States denied Puerto Ricans full citizenship following annexation of the island in 1898. The debate over Puerto Ricans’ rights represented a fundamental shift in United States’ constitutional jurisprudence.

“Lumbee Indians in the Jim Crow South: Race, Identity, and the Making of a Nation,” by  Malinda Maynor Lowery (University of North Carolina Press, 2010)

This scholarly book offers a deep look at the history of the Lumbee tribe — the largest tribe east of the Mississippi — from Reconstruction to the 1950s with a focus on how Jim Crow laws affected their community. This is the first of two books written by Malinda Maynor Lowery, a historian at the University of North Carolina at Chapel Hill who appears in the “It’s a Greens Thing” episode.

This is the second book written by Malinda Maynor Lowery, a history professor at the University of North Carolina at Chapel Hill who appears in the “It’s a Greens Thing” episode. It is geared to a more general audience and challenges the myths surrounding America’s origin story and Native Americans from Jamestown, the Lost Colony of Roanoke, and Plymouth Rock — while sharing the long history of the Lumbee people.

A fascinating article written by Sara Wood, former oral historian for the Southern Foodways Alliance, and historian Malinda Maynor Lowery, advisor and participant in “It’s a Greens Thing.” This essay examines Lumbee foodways based on oral histories and challenges readers’ assumptions about what it means to be Native American.