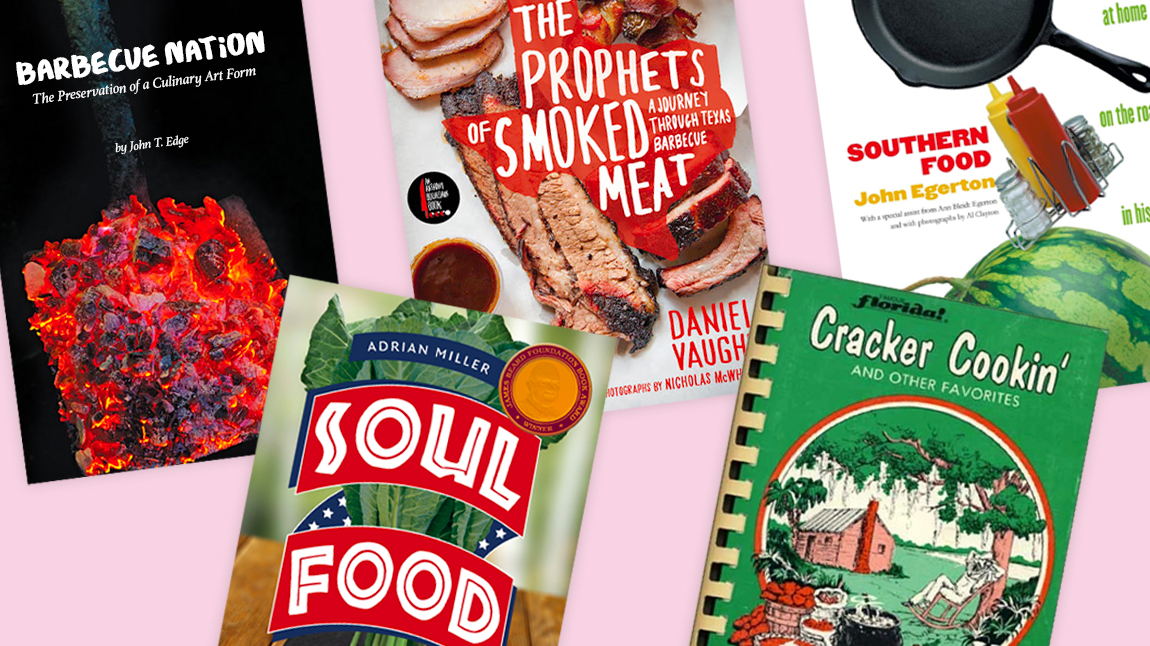 With the help of our scholarly advisors, we dug into books and articles to research each of our episode themes. Below is a list of some of the most helpful books and essays we found that shaped our understanding and informed our discussion of barbecue culture throughout the American South.

Soul Food: The Surprising Story of an American Cuisine One Plate at a Time by Adrian Miller (University of North Carolina Press, 2013)

As we eagerly await the 2021 publication of Adrian Miller’s forthcoming book, “Black Smoke,” which chronicles African American barbecue traditions, we recommend his James Beard Award-winning sophomore book that shines a light on soul food traditions often associated with African Americans. The book features illustrations, maps, recipes, and essays about quintessential soul food dishes, many of which pair well with barbecue.

Southern Food: At Home,  on the Road, in History by John Edgerton (Chapel Hill Books, 1993)

In his seminal Southern collection, John Edgerton explores Southern food from the perspective of dining out and taking out. The book reads very much like the sharing of memories at the dinner or diner table. His section, “On the Barbecue Circuit,” speaks specifically to the effort of seeking and finding good barbecue in the South.

Garden & Gun Magazine constantly visits the subject of barbecue in the South, past and present. In this article, award-winning food journalist Kathleen Purvis addresses the disappearance of barbecue institutions in North Carolina and the centuries of pit mastery that has fled with them.

This ode to the cuisine that defines cracker culture blurs the line between Southern and cracker cooking with dishes that are often considered integral to the Southern culinary canon. However, recipes like swamp cabbage, gator burgers, and turtle soup affirm its place in the “cracker” kitchen.

Barbecue Nation: The Preservation of a Culinary Art Form by John T. Edge (Saveur Magazine, May 2011)

This article penned by Southern Foodways Alliance director John T. Edge begins like a letter to a first love. It then shifts to interrogate the effects class and race have on which barbecue traditions and pit masters are exalted. In true John T. fashion, the colloquial tone creates vivid images while relaying important details of an unsung Southern history.

The Prophets of Smoked Meat: A Journey Through Texas Barbecue by Daniel Vaughn (Harper Collins/Ecco Books, 2013)

A tome of Texas barbecue by Daniel Vaughn, the nation’s only Barbecue Editor (for Texas Monthly). This was the first title ever curated by the late and legendary Anthony Bourdain for his Ecco Books line.

Southern journalist Brett Anderson writes about chef Tatsu Aikawa through the lens of barbecue, and how foodways are being shaped in modern Texas.