by
Andrea Weigl
The More You Know 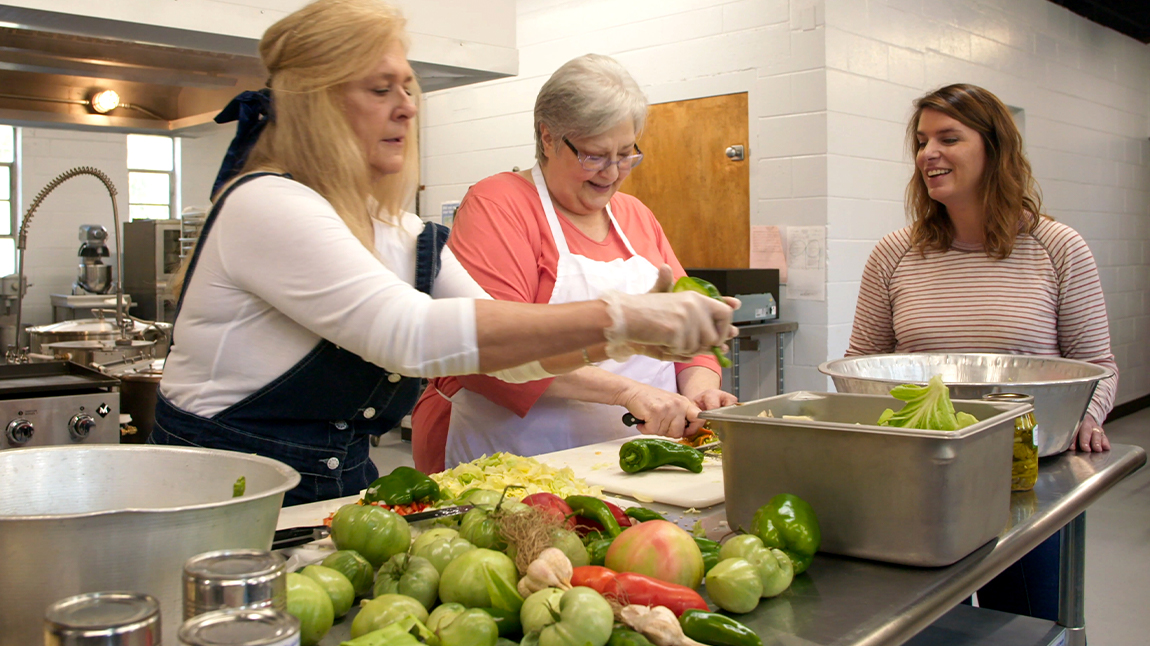 The “What a Pickle” episode took Vivian Howard and the crew from Lexington to the hollers of Whitesburg, Ky. One destination in Whitesburg was the CANE Kitchen, which stands for Community Agriculture Nutritional Enterprises, Inc.

The kitchen was obviously a cornerstone of this Appalachian community and so we talked to Valerie Horn, chair of the CANE Kitchen board, who explained its history and mission:

The CANE Kitchen grew out of the Grow Appalachia program, a project started at Berea College in 2009 and aimed at addressing food insecurity in Appalachia. In Letcher County, where Whitesburg is located, Grow Appalachia started at Cowan Community Center with 20 families who were encouraged to plant a vegetable garden for their own consumption and to sell any extra produce for additional income. In 2014, the City of Whitesburg Farmer’s Market opened with those families selling produce, which coincided with a slow down in the mining industry, one of the region’s major industries. That first year, the farmers reported $6,000 in sales at the market. Last year, they reported $125,000 in sales.

With that initial success, Horn said, community leaders wondered how to help families have healthy food year round and what these families could do with any surplus produce. That’s what ultimately led to the creation of the CANE Kitchen. But first, the Mountain Comprehensive Health Corporation, a non-profit community health system that covers five counties, bought the old Whitesburg High School building and offered a 20-year lease for $1 a year to create the CANE Kitchen. MCHC also supports the farmer’s market with its FARMACY program, which provides tokens to purchase fresh fruits and vegetables to more than 200 families with diet-related health issues.

The kitchen opened in 2018 and focuses its services on education, community engagement and enabling farmers and other local entrepreneurs to create value-added products. And so, residents can attend cooking classes on topics, such as healthy menus for those with diabetes and how to increase children’s fruits and vegetable consumption. From May to August, the kitchen hosts “Meal on the Hill” events, a free community meal served in conjunction with the farmer’s market. They hold special chef-in-residence dinners with chefs from all over the state, including Samantha Fore of Tuk Tuk Sri Lankan Bites and Ranada Riley of Ranada’s, both in Lexington, Ky. And, they help farmers turn their produce into other products for sale. For example, Joyce Pinson, owner of the Friends Drift Inn in Pikeville, Ky., expects to make at least 15,000 jars of her gourmet jams and jellies at CANE kitchen in 2020.

In a letter of support to help the kitchen receive some USDA funding, Pinson wrote: “Without the kitchen, we would be out of business at a time when we are fighting to usher in a new food economy that will benefit not only our family business – but will foster an environment where small-scale farmers and food entrepreneurs can find markets both here, and across the globe. CANE is not just one person’s dream. It carries the hopes of the Appalachian farm and food community throughout Eastern Kentucky.”