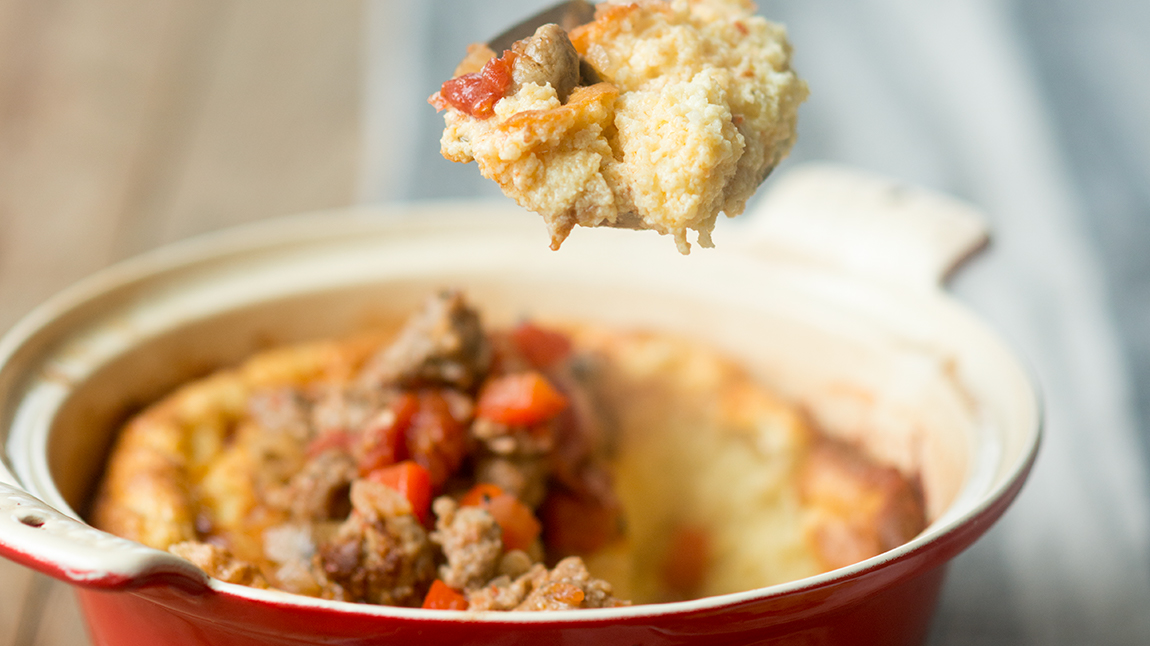 Make the spoonbread: Preheat oven to 375 degrees and grease a 2-quart baking dish with 1 tablespoon butter. Heat the milk, 2 teaspoons salt, sugar and cayenne in a 2-quart saucepan until bubbles from around the edges. Whisk the cornmeal and cook for about 2 minutes or until the starch grabs hold of the milk and thickens up tremendously. Remove it from heat and stir in 4 tablespoons butter, 1 piece at a time.

In a large bowl, whisk together the egg yolk and heavy cream until the yolks are fully incorporated and the cream is a pale pretty yellow. Then, in the bowl of your mixer fitted with the whisk attachment, beat the egg whites till they reach soft peaks.

Once the cornmeal mixture has cooled for at least 5 minutes, whisk a third of it into the egg yolks and cream. Follow up with the remaining thickened cornmeal, making sure you achieve a homogenous pourable batter. Using a spatula, fold a third of the whipped egg whites gently into the batter. Continue with the remaining egg whites. Pour the spoonbread batter into the grease baking pan and slide it onto the middle rack of the oven. Bake for 30 to 35 minutes. Make the ragout while the spoonbread bakes.

The spoonbread will puff up and turn a golden brown on top but be slightly moist in the center. This is the way it’s intended to be, but if you prefer it cooked all the way through, increase the baking time by 5 minutes.

Make the ragout: In a 12-inch skillet or saute pan, heat the oil over medium-high heat. Add the sausage, crumbling it into pieces as you drop it in. You should be able to add all the sausage in a single batch, but be careful not to overcrowd your pan; sausage that’s sitting on top of itself in a hot pan is not sausage that’s browning—it’s sausage that’s steaming. Once the sausage is in the pan, don’t shake it around like you’re Gordon Ramsey. Let it sit there for a good 3 minutes to take on color. When the first side is caramelized crisp brown, shake the pan, turn the sausage over with a spoon or spatula, and brown the other side. Once the sausage is brown on 2 sides, lift it out of the pan and set it aside. Pour off the fat, reserving 2 tablespoons.

Pour 1 tablespoon fat back into the skillet and add the mushrooms. Follow the same principle I laid out with the sausage: Do not shake and stir it like I know you want to. Let it sit and sizzle instead. The mushrooms will brown on one side over the course of about 3 minutes. Once they are caramelized, give the pan a shake. Add ½ teaspoon salt and cook an additional minute. Take the mushrooms out of the pan. Add them to the reserved sausage and lower the heat.

Add the remaining 1 tablespoon fat as well as the onion, bell pepper and 1 teaspoon salt. Let that sweat for about 5 minutes without browning. Stir in the garlic and chili flakes and cook for 1 minute. Add the tomatoes, chicken stock, sausage-and-mushroom mixture, and the remaining ½ teaspoon salt. Bring all that up to a brisk simmer and cook uncovered until the liquid is reduced by about two-thirds. Stir in the butter. The ragout should be shiny and juicy, not brothy. If you let too much liquid cook out and the ragout appears dry, add ¼ cup water with the butter to glisten things up.

Serve the warm spoonbread alongside or underneath the sausage ragout.