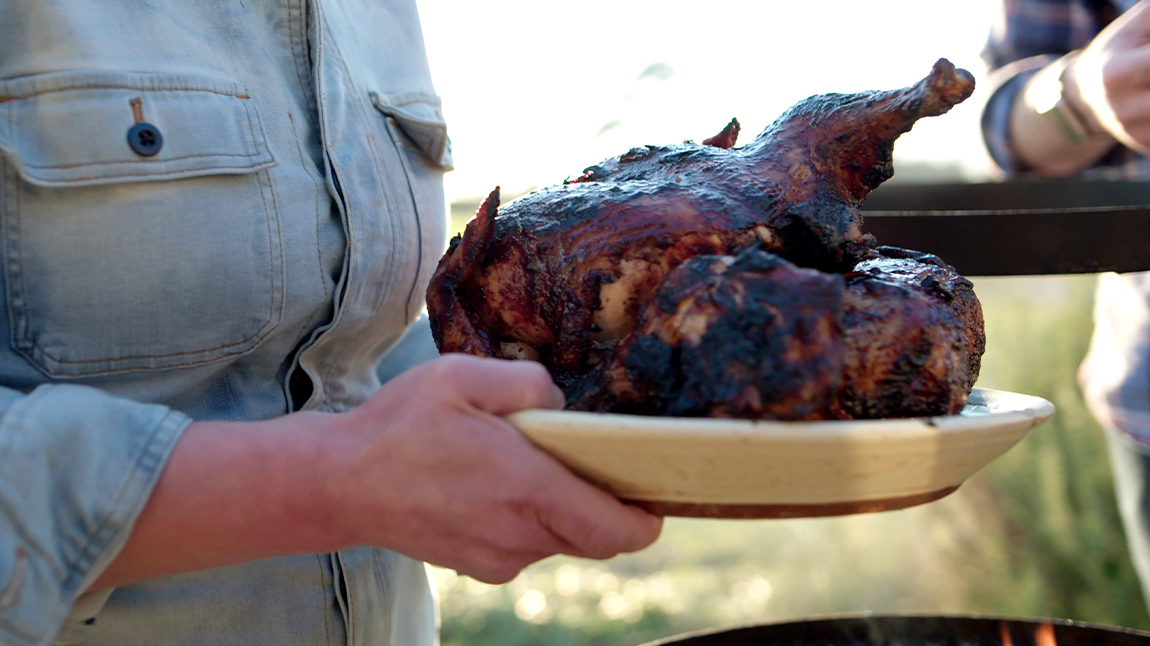 If you're all out of Vivian's bottled Blueberry BBQ Sauce, don't worry! Fire up the grill, we have the recipe for you to make it at home.

Make the sauce: Put the blueberries and 2 tablespoons of the vinegar in a food processor. Pulse the berries just to break them up and get some juices flowing.

In a medium saucepan, combine the pulverized berries with the remaining vinegar, sugar, chile flakes, cinnamon stick, and bay leaf. Bring to a simmer over medium heat, reduce the heat to low, and then cover the pot. Cook for 1 hour, stirring occasionally.

Carefully transfer the hot sauce to a blender. Remove the knob from the top of the blender lid and cover with a dish towel to prevent an explosion. Blend the sauce to get it as smooth as possible, then pass it through a fine mesh strainer, directly back into the pan. Simmer the sauce over medium-low heat, stirring occasionally, until it has reduced by about one-third of its original volume (25–30 minutes). It should coat the back of a spoon and have the viscosity of maple syrup. Let the sauce rest, at least overnight, before using. Blue Q will keep for months, covered, in the refrigerator.

Make the chicken: Light your grill and heat it to roughly 350 degrees. Thirty minutes before you plan to grill, bring the chicken to room temperature and season with kosher salt and black pepper.

Place chicken, skin side up, on the grill and close the lid. Cook, covered, for 20 minutes. Baste with blueberry sauce every 5 minutes for an additional 20 minutes, keeping the lid closed between basting activity. After a total of 40 minutes, flip chicken over to caramelize the skin, and baste the other side for 10 minutes more. Using a probe thermometer, check the internal temperature of the meaty part of a thigh. When it reaches 165 degrees, remove chicken from the grill.

Off the grill, douse the chicken in ½ cup blueberry sauce and let it rest for 10 minutes. Carve into 6 or 8 pieces and toss once more in another ½ cup sauce. Serve the chicken warm or at room temperature.