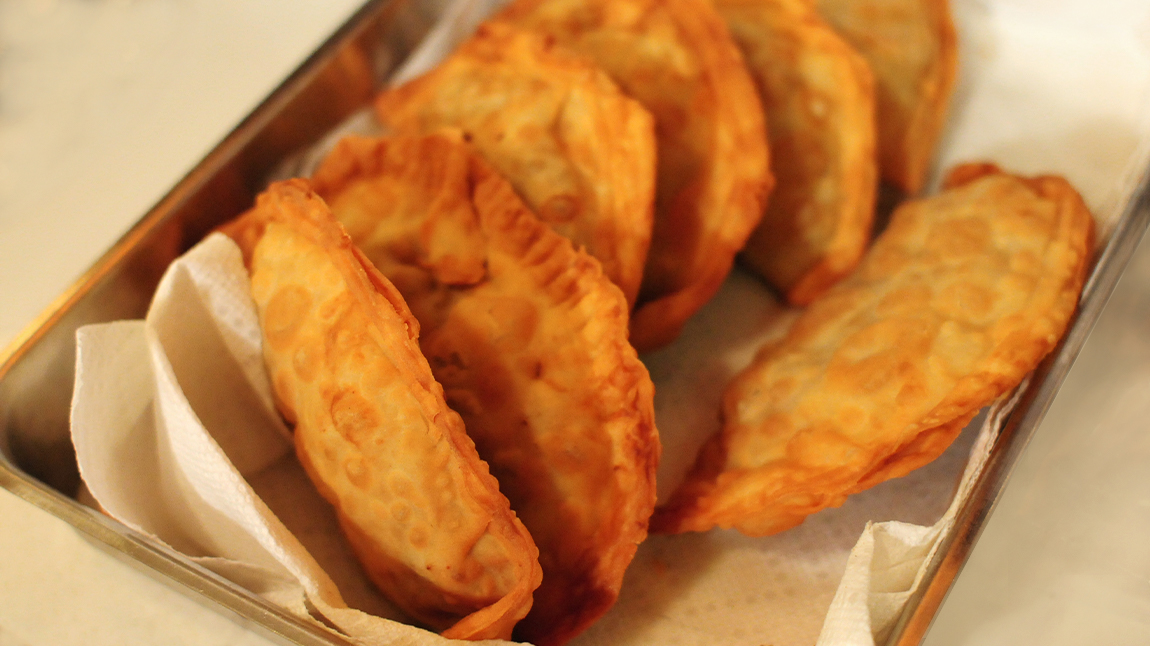 From Vivian Howard’s cookbook, “Deep Run Roots,” (Little, Brown & Co., 2016). Vivian wrote: The hardest part about making these is rolling out the dough. We recently started using a tortilla press to make the job easier. It does require a few more strokes from the rolling pin after it’s been pressed, but overall the gadget helps. The other thing I see people struggle with is the urge to overfill the pies. Two tablespoons of dough just doesn’t look like that much when it’s laid out on the dough. That’s because it’s not that much. This hand pie is just as much about the thin, blistered brown crust as it is about the filling. Let it be. The rosemary sugar is not a traditional garnish but I like it. Your call. Note: If the apple slices are more than 1/4 inch thick, give them a rough chop with your knife.

For the Rosemary Sugar:

Make the Filling: In a 10-inch saute pan or skillet, combine the apples, cider, water, sugar, salt and lemon zest over medium heat. Bring it up to a boil and cook the pan is nearly dry. Stir in the lemon juice, and cool down the filling before assembling. The filling can be made up to 5 days in advance.

Pour the remaining water into the lard and begin working in the flour by moving the lard mass around, accumulating flour as you go. Continue until a soft, tender dough forms. You will use nearly all the flour in the bowl. The dough will be quite pliable and tender, but it should not be sticky. Cover the dough with a damp paper towel until you’re ready to make the pies.

Make the Pies: Pinch off a golf-ball-size round of dough. Flour your work surface, a tortilla press if using, the dough ball and your rolling pin. Place the ball in the center of the press and flatten it, or roll the dough into a thin circle with your rolling pin. Each round should be so thin you can see colors through it. Spoon 2 tablespoons filling in the center of each round. Using the back of your spoon, flatten the filling slightly so the delicate dough doesn’t have to do it when you fold it over.

Using your finger, dampen half the circle’s edge with water. Fold the dough over to make a crescent and crimp edges with a fork. Trim the edges with a knife and transfer the pies to a floured baking sheet till you’re ready to fry.

Heat 1 cup lard in a 12-inch cast-iron skillet over medium heat. Test the heat by dropping a pinch of flour in it. If it sizzles right away, start frying. In a 12-inch skillet, you should be able to fry 4 or 5 jacks at a time. The lard should come a little over halfway up the jacks. They should not be completely submerged. Cook till they are golden brown on one side and carefully turn them over and brown on the other side. Drain the cooked jacks on paper towels and sprinkle with the rosemary sugar on both sides while they’re still hot. Follow up with the remaining jacks, adding more lard if you need it. Serve warm or room temperature.

Make the Rosemary Sugar: Combine the rosemary, sugar and salt in a food processor. Pulse a few times. Transfer the sugar to a bowl and set aside.